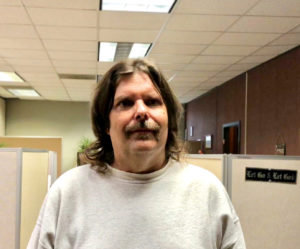 Matt was married for several years and had three children. He worked at Laminated Products and West Vaco for over 12 years, and then the bottom dropped out. Losing his job was the first step in a long line of obstacles leading to a decline in his sobriety and mental wellness.

“I had a couple of nervous breakdowns and ended up living off my 401K. When that was gone, I was broke and ended up homeless for a while,” he says. Matt had a couple of voluntary admissions to St. Luke’s Medical Center Psychiatric Unit, trying to get a handle on what was happening to him. “For one month,” Matt says, “I slept behind the Simmons Library in downtown Kenosha. The groundskeeper would bring me a sandwich, chips and a soda every day. I’d hang out in the library all day until it closed, and then I’d go outside behind the building again. People would always bring me things—sometimes food. Once someone brought me a blanket.”

Matt doesn’t know how it happened (“I think my mother did it, making a lot of phone calls!”), but he finally got on Social Security Disability. He was diagnosed with Schizoaffective Disorder and has a lot of anxiety and depression. After one of his hospital stays, he began receiving Supported Apartment Program services from KHDS. Through that program, Matt was able to get his own apartment and get off the streets. “I was doing really good. Jayne Nudi was my case worker, and she got me a place,” Matt says.

Matt then decided to move to Rhinelander, Wisconsin —a decision that didn’t work out so well. He did not have the same level of support there, and soon his symptoms increased and his illness began to take control of his life once again. “When I got back to Kenosha, I was in bad shape. I got sent to Winnebago for two weeks and then to the KARE Center. I started working with Randy Reed, and he got me back in the program here. I got into a nice rooming house where I live now. I love it there. This June will be my two-year anniversary of being there!”

Because of Matt’s diagnosis, one of his goals is to be involved and to avoid isolation. Comprehensive Community Services (CCS) helps him by offering a variety of mental health groups and activities throughout the week that he can choose from.

“It gets me out of the house. I go to two or three groups a week. I live very close, so it’s easy to get to. And that’s not all. My payee is here, so I can pick up my check every week—just like having a pay day. They handle my medication, so I don’t have to worry about getting to the pharmacy. My case manager is very supportive. I have to have some teeth pulled, and she is going to go with me so we are sure about what aftercare is needed. That’s supportive!”

When asked what he would tell someone who is experiencing what he experienced before coming to the CCS program, Matt simply states, “I don’t know what I would do without this program. I’m so thankful to be where I am—to have this stability. I feel like I won the lottery. For the last couple of years, I feel stronger and stable. Not one day goes by that I don’t think about how lucky I am and how thankful I am.”