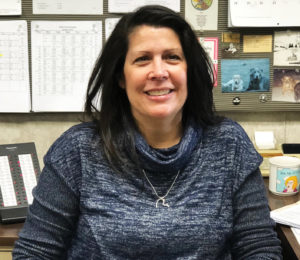 Gina started out at Kenosha Human Development Services (KHDS) working part time typing crisis cases and entering data for the Community Intervention Center. That was over 32 years ago, she says, “After about a year, I went full time and added creating forms and running reports to my job.”

When the executive secretary, Carrie Volkman, moved to another state, Gina took her place, working for then Executive Director George Schwartz. Gina was also the secretary to everyone else in the building! She was tasked with licensing, completing applications for grants, ordering supplies and basically being the “go-to” person in the office. All employees knew that Gina could answer any question. After George retired, Gina was executive secretary to Byron Wright, who took George’s place as Executive Director. “Along the way,” Gina explains, “my role changed to Operations Manager and eventually to Business Manager. I am now working with Jeannine Field, our current Executive Director. I’m hoping we retire together!”

Gina says her biggest challenge throughout her time at KHDS was taking over for Carrie Volkman. Ms. Volkman was “the” secretary. At that time, KHDS only needed one person to answer the phone and when people called they expected to hear her cheerful voice. She was well loved by all and knew just about everything regarding the agency and how it all worked. “She was a tough act to follow!” Gina says.

The best part for Gina has been all the friendships she has made over the years. “It brings a smile to my face when I think of everyone I’ve met here at KHDS who has made an impact on my life in some way. I’m not sure many people can say that about where they work!”

In her 32+ years at KHDS, Gina has seen a lot of changes. People and programs have come and gone. But by far the biggest change, in her opinion, has been technology. She says, “Even though I still use my trusty typewriter here and there, it was what I used for a lot of my work! I remember when we upgraded to the “memory” typewriter—I thought it was so cool! Jeannine has, without a doubt, brought us to a completely new level of technology.”

For the immediate future of KHDS, Gina would like to see the agency “slow down” just a bit. She says, “This past year has been non-stop! It would be nice to have the majority of employees working in one building. We are definitely growing out of our current location.”

No matter how large KHDS may grow, there is one thing that holds true. Gina says it best, “[We are . . .] family. It may sound like a cliché, but these people are my second family! They are as thoughtful and compassionate with their coworkers as they are to the people we help. I am proud to work for KHDS. It is a unique place to work!”

You have Successfully Subscribed!